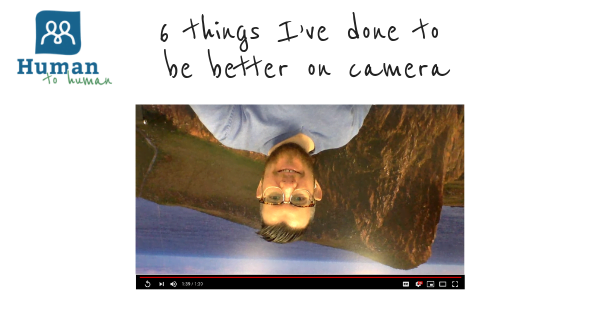 6 Things I’ve Done To Be Better On Camera

You stand in front of the camera and it all just feels a bit awkward. Your palms are sweaty, knees weak, arms are heavy. You’ve got some nuggets of gold you’re ready to drop, but they just don’t come out the right way. The resulting video is ok, but certainly not what you had envisaged in your head. Does this situation sound familiar? Yes, I’ve been there too.

I’ve put my ideas down for the people stuck between ‘nailing it on video’ and ‘haven’t even tried to do a video’. From my daily dealings with clients from all sorts of businesses, I know there are so many people sitting between these two extremes. To boil it down, this article’s for those of you who are ready to harness the insane power of video in your working lives, but want a bit of help getting there.

“IT’S ALRIGHT FOR YOU, YOU’RE GREAT ON CAMERA. FOR PEOPLE LIKE US, IT’S NOT THAT EASY”.

I’ll admit that after watching Wayne’s World at the tender age of 9, the concept of an ‘extreme close up’ both appealed to me and caused me to follow any video camera I ever saw around in the hope of pushing my tonsils against the lens, ruining many home movies in the process (not to mention giving my family too much ‘embarrassment-fodder’ at my 21st).

But it wasn’t until about three years ago that I was required to regularly step in front of the lens. You see, like you, I used to work in several environments where video was more or less non-existent. It wasn’t that I worked with a bunch of dinosaurs or anything like that, it just wasn’t a priority or expected part of my working life.

As I turned up at the doorstep of The Social Adviser with a pocketful of dreams and a heart full of hope, I was almost immediately confronted with a camera in my face as I went about my daily work. It was distracting and unnerving, even though I didn’t have to do anything but ignore it. As time went on, the expectations of me increased and soon enough, I was doing voiceovers for videos, ‘pieces to camera’ (i.e. staring down the barrel of a camera and talking into it) and interviews.

I look back now on some of those earlier videos and cringe. I can see my awkwardness, self-consciousness and uncertainty. This experience would be no different to you going back a few years to your first attempts at client meetings, public speaking or even writing a proposal. Like Bambi learning to walk, the first few steps are tough and a few of the animals in the forest may laugh at us. But over time, it gets easier and easier until we redefine a new sense of what’s normal. And when it comes to video, I am fortunate to be able to say that it is now no more challenging than any other aspect of my role and daily working life.

So what has helped me along the way, and what are some of the tips I have successfully used with clients over the last few years to make them more comfortable on camera? Allow me to shortcut your development out of the awkward zone and into the ‘meh – it’s just a video’ zone through six of my best tips.

1. Learn how to edit videos first

This may sound like a weird one, but this is where it all begins. By immersing yourself into the end to end process of what happens after you finish filming, it teaches you so much about being on video, such as how easy it is to do a second take if the first one isn’t up to scratch, how important it is to leave a good pause between your ideas so they are easier to mix and match and by listening to yourself over and over again through the editing process, it will also bring to your attention areas of your delivery that could be slightly improved. Whilst this may sound like a daunting step, most computer operating systems (and even your smartphone or tablet) have editing software that make this job quicker and easier than you might expect. For the Windows users out there, you either already have, or can download a program called ‘Movie Maker’ for free. For those Apple Mac or iPad / iPhone users out there, iMovie is the way to go.

2. Avoid learning with a teleprompter, at all costs!

If you use a teleprompter in an attempt to be comfortable on camera, it’s the equivalent of thinking that holding reams of A4 pages in your hands on stage is the best way of becoming a public speaker. Sure, it is a good security blanket, but like anything in life, you only truly achieve mastery and continual improvement by taking a leap and leaving your comfort zone, even if this means you stumble a few times along the way. When it comes to being on video, excessively relying on a teleprompter means you are delivering your message from the head, rather than the heart. The result of this is that you will lose all engagement. The emotion you put into a video is directly proportional to the likelihood of someone on the other end feeling something by watching it.

The caveat here is that once video becomes second nature to you, and you can speak comfortably from the heart, you can then plug in a teleprompter to amplify your ‘heartfelt’ and resonant video delivery. But I promise you, if you want to create truly engaging video, it simply doesn’t work the other way.

This one is so obvious and I don’t want you to think I am being patronising by mentioning it, but it is so important when it comes to video. I often speak to disheartened clients who aren’t happy with their video content, and it is only their third attempt! Seriously, when have you ever been awesome at something on your third attempt? And if you can think of an answer to that question, I doubt that this means you will be sustainably awesome at it over a long period of time without investing in further learning.

So the best way to destigmatise the apparent ‘weirdness’ of being on video is to do it often and to care not for the consequences (check out this article from Seth Godin for a very interesting take on this concept). The topics of your videos don’t have to even be work-related. Just get in front of the camera and get the learning curve behind you ASAP.

4. Allow yourself enough time during a filming session

If you follow my steps in this article, I promise it will eventually become second nature. But until then, you are going to need to invest some time in this new skill. One of the biggest mistakes I frequently see people make is allocating an insufficient amount of time for video recording, especially when they start out. This means during a filming session, they are still thinking of the bad meeting they came from or distracted by the next meeting or appointment they have straight afterwards (Tip 5 below will help you with this as well).

But whilst you may already be a confident presenter or good at talking, you may still be surprised at how long it may take to get into the flow of speaking on video, especially in the early stages. To give your personal development on video the attention it needs, you need to be ‘present’ and free of distractions. Often the best way to do this is to allocate a solid chunk of time to your session (initially, I would even suggest 10-15 times longer than the length of the video will be) and ideally, with a bit of free space in your diary either side of this session as well.

Body language is such an important part of our communication, and it often follows on from how we are feeling. Whether you feel nervous or confident and relaxed, our body shows it and it either helps or hinders the message we are trying to deliver.

But one of the biggest turning points in my own videos was understanding that it can also work in reverse; the right body language can flow back and affect how I am feeling. By deliberately starting most of my videos with a strong and confident pose, it has had the effect of meaning my videos kick off strongly. The subsequent momentum from this continues throughout my videos and has improved my video quality dramatically.

6. Picture the ‘end-user’ in your head

I have also used another quasi-mind trick to great effect in my videos. I suppose like any skill in life, mastery results from worrying less about whether you are doing a good job and focussing instead on the goal of what you are doing, and the required inputs to make that happen. Especially in the foreign land of presenting to camera, it can be easy for your mind to get caught up in the strangeness of the situation. What I often do instead now is to focus on someone who will watch the video, or who I want to watch the video. Not just in a ‘generic-sense’, I mean in a really specific, this is who they are, this is exactly how they look like, this is where they are when they’re watching it and this is their reaction. It forces my mind to shift from ‘rational mode’ to ‘emotive mode’ and once again, tap into my heart rather than my head, the main beneficiary of this habit being the person watching my video.

This list is by no means exhaustive, but I consider them the six levers to give you maximum traction as you head through the awkward tunnel of being new to video. Give one or more of them a try, and I would love if you shared the results with me in the comments section below!

Do you have any tips of your own for being on camera? If so, be sure to share them below so others can benefit from your personal learning curve.

Michael Back, Founder of Human to Human

Get Your Free Checklist

What the best advisers are doing differently from the rest

Thank you for opting in. You'll receive your handbook via email.

Thank you for opting in. You'll receive your handbook via email.